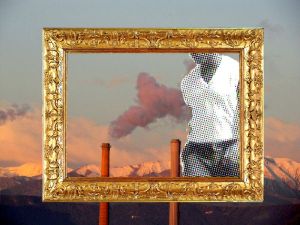 It is maybe difficult, at the first glimpse, to draw a strong link between transparency and human rights. However, the relationship is bold, and here I’ll try to highlight briefly some of the issues that put together transparency and human rights. It’s is not by chance that transparency gained importance in the last strategy of ActionAid, the NGO I work for. ActionAid is an international organisation, working with over 15 million people in 45 countries for a world free from poverty and injustice.

Accountability is the first bridge between transparency and human rights. To held someone accountable about something we need to know with a high degree of clarity who the duty bearer is, who is the right holder, to which right the latter is entitled to. Without a clear picture about that, any campaign or advocacy action would be vane, or misplaced, or biased. It’s true that there is a long path from the identification of the right you are entitled to, and who is responsible to that, and the respect or fulfillment of this right. But it is also true that, in a very complex system, as contemporary societies are, the first is already a big step.

The second link is corruption, or, better, freedom from corruption. As a very interesting report by International Council on Human Rights Policy and Transparency International points out, corrupt acts violates human rights directly – for example when you have to pay a bribe in order to be treated by a doctor, otherwise you won’t; or indirectly, when, for example, organized crime could enforce his law, not being constrained by corrupted public authorities. Then, it’s simple to draw the relationship between lack of transparency and corruption.

Good governance is the third bridge between t. and hr.. This relationship is two-folded. One: citizens and civil society has to know the evidence on which the public decision are made; two, they have to know, as far as it’s possible, which is the relationship between the evidence and the decision.

An example from local social policies: the benefits to poor people. As a citizen I have to know:

1) at which level of poverty public authorities understand that a person have to receive a money benefit;
2) how many people fulfil this condition;
3) how many people receive the benefit, and how many fulfil the condition and do not receive the benefit, and:
4) based on what public authorities decide to put the money on these benefit, instead of putting money on housing for elderly people, or to services to disabled people, and so on.

I do think that, in the current situation of spending cuts, this kind of transparency, together with participation and involvement of citizens and civil society, would provide on one hand, better decisions, and, on the other hand, some kind of co-responsabilization by the public for the hard decisions made.