I wrote this text as an answer to some questions Nazmul Ahsan (Senior Program Officer at ActionAid Bangladesh) asked to the colleagues. Maybe it could be useful to clarify some issue at stake in our program work.

Does Economic Alternative can create credible rights based alternative? it is complementary or supplementary?

First of all, I think is necessary to agree about the terms. In the ActionAid Human Right Based Approach manual, People’s Action In Practice (available here: http://bit.ly/1QQxCaQ) only feminist economic alternatives is defined, as “innovative solutions that seek to address the gender biases in the present economic system (at both micro and macro levels) and that recognise the significance of unpaid care work”, while alternatives are defined as “ideas which stretch the scope of our existing interventions or frameworks – promising something different for the future, something positive, something that changes systems”.

Whithin this framework, we must consider as economic alternative only a structural change, as, for instance, a more fair fiscal system? Maybe not: further in the handbook the scope of economic alternative is narrowed a little bit; we read “A lot of our work in promoting economic alternatives for women will focus on young women, reducing the multiple responsibilities of care work they juggle and helping them find new forms of sustainable income“.

Holding that true, we can say that economic and right based alternative are intertwined and complementary.

Intertwined because, for instance, a fairer tax system is both a right based and an economic alternative; the same is for a minimum income scheme.

Complementary, because, for example, strengthening small business held by people in poverty, is an economic alternative (to overcome poverty), that, along with other economic alternatives (as strengthening occupability), is necessary, but not sufficient to overcome poverty. For example, not all people could run a small business or find a decent work, because of illness, age, or discrimination.

In the same way, right based alternatives are necessaries, but not sufficient too. A minimum income it’s right to create a safety net for people in poverty, but it isn’t an answer for a young or adult women or man who would like to have a job. To put another example: a universal health system is a fundamental right based alternative, very useful to prevent people to fall in poverty, but it’s not sufficient to overcome poverty in itself.

Where the economic alternative hit to change the structural cause?

Somehow I’ve answered this question above, showing how right based and economic alternatives are intertwined.

It’s clear that the micro economic alternatives doesn’t change the system, but insert some people into the system; they are alternative because they change – or may change – the power relations.

I can add that, from an historical and empirical point of view, the two side have a circular feedback: people who are improving their economic position, will probably fight for their rights (not only economic), while universal civil, political and social rights give all opportunities to have economic alternatives.

What are the key aspects we need to ensure in our work on creating economic alternative?

I think this question deals with many many issues, but I try to answer with three points:

1) Economic alternatives (in the broad and narrow meaning) have to be effective. If a family starts a small business, it has to be sustainable in the long term, and give the family the very opportunity to escape poverty.

2) Economic alternatives has to be also environmental and social sound. This goal, of course, many times clashes with the first point, but an unjust economic activity is, by definition, not an alternative.

3) Said that, the “problem” of the economic alternatives (and, I think of most of the economic realm) is that many changes – not all, but many – are beneficial to someone and detrimental to others, at least in a comparative way. This point has to be kept in mind, notwithstanding it’s quite impossible to deal with it and, at the same time, do something in this field. 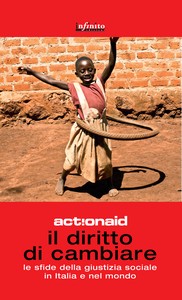 On the occasion of the United Nations’ World Day of Social Justice, ActionAid International Italy launched a new book: Il diritto di cambiare. Le sfide della giustizia sociale in Italia e nel mondo [The right to change. The challenges of the social justice in Italy and in the world] (ed. Infinito).

“Social justice – as we read on the back cover – is the opportunity for everyone to be included in her/his own society, to participate to the decision making that affect him/her, and to be granted a sufficient level of security, of education and of access to information”.

But why “the right to change”? In order to mainstream social justice, a deep change is needed; and the willingness of a person and of a community «to engage him/herself is the first requirement for those who pursue a change» (p. 10).

The book points out some cases of promotion of the social justice, in the Southern as in the Northern part of the world, organised in three main areas: food right, women rights and citizen participation.

The book resulted from a joint work within the organisation. I contributed with the research for the case related to food right in Italy.

Link to book page on the publisher website (in Italian). 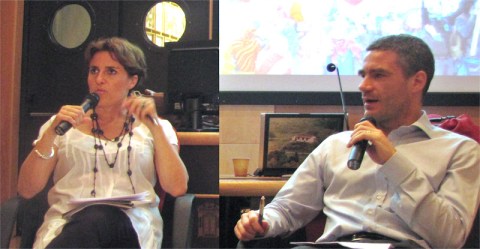 June the 24th ActionAid organized in Turin the debate “Una Mole di lavoro: prospettive e interrogativi sulla lotta alla povertà tra Nord e Sud del mondo” (A lot of work: perspectives and questions about the fight against poverty in the global North and global South). Tiziana Ciampolini (responsible person of the Caritas’ Study center about Poverty and Resources) and Marco De Ponte (ActionAid’s Italian Secretary general) discussed with the participants what poverty in a country of the global South and in Italy have in common; whether promoting human rights in Africa, Asia and Latin America could suggest sound strategies and best practices to resist social exclusion and inequalities in a city as Turin, or not.

This debate inaugurated the activities of ActionAid’s territorial presence in Torino. I participated to the organization of this meeting, as a part of my new job at ActionAid in Italy. Some analysis brought me back to Italy: the fading of the dichotomy between the North and the South, new and widespread kinds of poverty in Italy, the depression of the social and relation capital in Europe, the opportunity to use in the North practices and methodologies I adopted during my work promoting sustainable development in Brazil.

Disclaimer: the organization cited do not necessarily endorse the contents of this post.